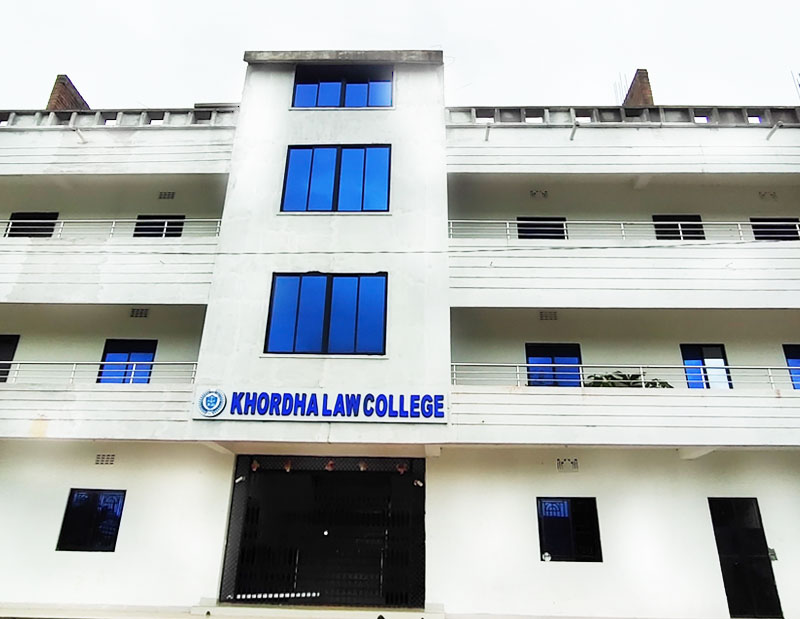 Only 15 numbers of senior citizens of Khordha District were united in a get together under a banner of 'Odisha Human Resource Development and Management Trust'. Those senior citizens after their retirement from various important placements held in Govt. of India, Govt. of Odisha, corporate & public private cooperative sectors have joined in unison to do something non profit motive & voluntary. The date of their gathering was on 15th November 2015. Flash of English daily News that 3.15crores of legal cases are pending at different courts and nearly 36crores of Indian public are directly or indirectly in such litigation have attracted the attention of senior intellectuals and they have been motivated to do something in this direction. They formed the trust entitled. 'O.H.R.D.M Trust' and they initially desired to open a 3 year Degree LL.B College at Khordha with proposed intake strength of 150.The ultimate goal was fixed to build an integrated 'Excellent legal hub' consisting to LLB Degree, integrated 5 years Law courses on different subject combination, LLM ,Research chair on Law & Judiciary as well as civil service coaching center with aim for raising 100% placements. General Secretary on behalf of trust submitted prescribed application to Director, Higher Education on D-30.11.2015.The trust was also registered on the same day. Mr. Pradeep Kumar Das, Dy Director (NGC-I) was appointed as Inspecting officer by Directorate of Higher Education, The trust took a private building at plot No-2733/2972 Jajarsingh mouza of Khordha town to accommodate the proposed college. On Dt. 31.05.2016 the High-power committee cleared our proposal and allowed to open 3yr degree Law College at Khordha with 60 intake capacity in 1styr LL.B from 2016-17. The Khordha Law College in obedience to stipulated conditions made TDR of 20lakhs & pledged to Director, Higher Education, deposited treasury challan of Rs 2.00lakh for SC/ST stipend. Made liquid deposit of more than Rs 8.00lakhs. Sworn affidavit before Executive Magistrate that the management will not depend on Govt. for financial assistance or Grant in aid and will not run the College profit motive or commercial, Viewing the proactive and positive response to Govt. instruction the Higher Education Directorate the Govt. of Odisha allowed permission on 5.10.2016. Besides the Khordha Law College has deposited affiliation fees & security deposits with Utkal University and the University authority has issued a No objection certificate indicating that soon after BCI allows affiliation University will affiliate our college. We have the pleasure to inform that one N.R.I senior citizen a reputed physician Dr. Dhirendra Kumar Pattanaik has instituted a full-fledged Library along with its maintenance with cost of Rs 8.00lakhs which includes Books, Bookshelf's, Air conditioner, Computer, Fire Extinguisher and staff support. Similarty another senior citizen who has retired as Additional Director General Dr. Rajendranath Samantaray instituted a Gold Medal with TD of Rs1.00lakh towards best performer student of Indian Constitution. With the blessings and good wishes of District Administration, Judiciary, Legal bodies, Directorate of Higher Education, Utkal University and local people in general i.e irrespective of political party lines are very much kind hearted to our Law College. For all these beneficial conducive climate a healthy and studiously at, atmosphere have emerged. All our Good Luck our students have already appeared 1st semester and second semester Examination. In the 1st semester Examination, the result of which is already published out of 60 appeared 56 students have secured 1st class. Viewing peaceful non controversial and study supportive environment the University authorities have allowed our college to be center of examination. We are hopeful almighty is with us and we will march forward. We the old citizens with heavy heart still do believe that 'Almighty' blessing is still with us and it is as because God is kind tous.